Exploring the cave system is a team effort. Around 20-25 people are involved in the project and the team includes divers, speleologists, local area experts and surface staff. Below you can read about some of our team members 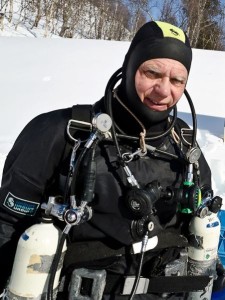 ”Bosse” was the one, who discovered the entrance of the cave on the bottom of lake Dolinsjön in July 1979. Almost four decades later, at the age of 69, Bosse still is a cave diver, and he enjoys visiting the beautiful passages of the cave now and then. He is also following and assisting the mapping work with the help of electromagnetic devices.

Bosse has been caving since 1968, diving since 1973 and became a cave diver in 1980. He has been working as an electronics/physics development engineer in the ASEA/ABB company for more than 46 years and is now retired. Bosse is a radio amateur (SM5CJW) and active in amateur radio direction finding (ARDF) since 1961. During the last 35 years, he has developed a number of communication/radiolocation devices for caving. His equipment is used to follow the divers in the cave and to locate points on the surface above the reference points. Micke is one of the original team members back from 2007 when the first expedition was planned and he has attended almost every year since, as a diver, media expert and photographer.
Micke started diving in 1997 and was an enthusiastic wreck diver before he discovered the fascinating world of caves and mines.

Working in a media agency and being the founder of the scandinavian scuba forum dykarna.nu, Micke is in charge of our homepage and social media updates. He also produces movie clips for the expedition as well as mapping new areas of the cave. 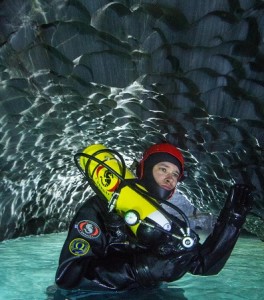 Dmitri is the expedition leader. He is also an explorer cave diver and enjoys visiting the far corners of the cave, trying to uncover more of its secrets. Dmitri holds a PhD in chemistry and lives in Bergen (Norway), where he works in the offshore oil industry.

He started as deep wreck and rebreather diver and went on to explore caves all over the world, from Australia and Russia to Florida and Mexico, although it is in Bjurälven that he has found his true call for exploration. Winter adventures, dry caving, extreme diving conditions are all among the things, making Bjurälven so special place to explore! 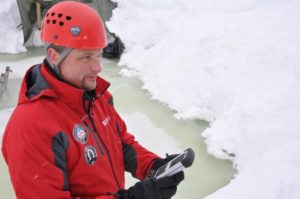 Mats is also one of the original team members from back in 2007, when the first expedition to Bjurälven was conducted. He has attended almost every year since, as cave diver and communication-, mapping- and surveyexpert.

Mats started caving in late 70´s and started diving in the early 80´s. He then combined caving and diving in Scandinavian caves (mainly sump diving) starting in 1989. Mats is a former army officer and works today as a GIS-expert at Esri. He lives with his family in Mackmyra, Gävle. 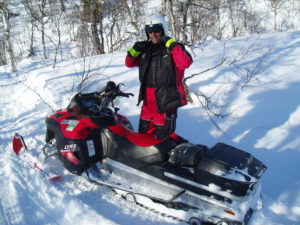 Johan is the former expedition leader and one of the founding members of the expedition. He started diving in the age of 23 and soon came in contact with Swedish sump diving, which has become his passion for more than 22 years. He has been exploring most of the large caves in Sweden and attempted to dive in Bjurälven for the first time in 1997.

Johan has commercial diving license and is a part-time fire fighter. He lives with his family in the mountains of Funäsdalen, not far away from Bjurälven, and works as engineer for the municipal real estate office. 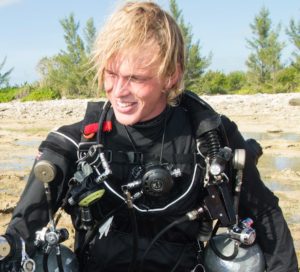 Oscar has been diving since age 13 and still loves it every time. He lives in Gothenburg on the west coast of Sweden, where he currently works with distribution of dive gear. His background is marine biology and biotechnical engineering.

Oscar was the 2012 European Rolex scholar for Our World Underwater Scholarship Society, something that has resulted in a lot of diving and travels all over the world. He is an active technical diver that enjoy testing and using different equipment depending on the situation at hand. He can get equally excited about a rare nudibranch and a big cave room but it is the sense of exploration that is the most exciting to him. Stina was instantly dazzled by the beauty and mystique of the caves after making her first cavern dive in 2011. She decided on the spot to start the training to become a cave diver. Since then she has explored caves in Mexico, Bahamas and Sweden, driven by her great curiosity and admiration of the geological formations.

Stina joined the expedition in 2016. She works as anesthetist and is a dive physician. With her medical background, combined with experience in dry cave rescue, her main task in the expedition is healthcare and diver safety . Marcin has been with the expedition since 2013. He started diving in 1999 and has been into technical diving since 2010. Marcin works in the diving industry full time and is participating in a number of diving-related projects.

He is head of diving in the Tuna-Hästberg mine. He considers being a part of the Expedition Bjurälven to be an incredible opportunity for development, both as a diver and an individual. Sidemount is Marcins favourite form of diving and mine/cave exploration is what gives him most peace of mind and satisfaction. Robert is our creative inventor and digging specialist number one, with high interest in what tools can be used for that. When he first find a lead for a new cave (tunnel), nothing can stop him. He’s one of those finding and mapping most Norwegian water-filled caves. He works with survey, communication, video, compressors and everything needing (or not needing) a bit of modification. 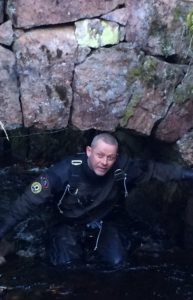 As one of the early members (joining in 2008), Pirre has seen Expedition Bjurälven develop into what it is today. His main interests are mine and cave diving as well as rock climbing, and he is also a trained marine archeologist.

Exploration and mapping of new cave passages is what drives Pirre. Among his strengths is the long experience of outdoor activities in the mountains, allowing him to efficiently organize the base camp logistics. 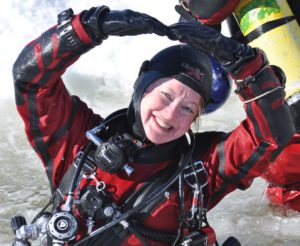 Growing up on a farm in inland Norway, you would not guess that scuba diving would be Ane`s main passion in life. Despite that, Ane is an instructor and a technical cave diver. After her first cave dive in Florida, she totally fell in love with caves and have been cave diving as often as she can ever since. “Cave exploration is one of the greatest activities I can do outdoors and my energy level increases by every minute under water!” says Ane. She joined the expedition in 2016.

Ane lives in Trondheim, where she works as a project manager. She is the head of the Norwegian Cave Diving Association. Her talent as an organizer is highly appreciated among the expedition members! 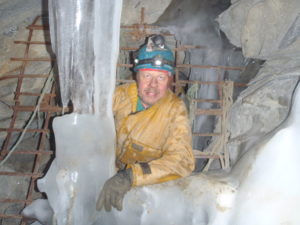 After playing in caves in his childhood, Leif started with serious caving more than 30 years ago. Since then, he has been exploring numerous caves all around the world. Gouffre Berger, Lechuguilla – the list is long. Leif was also the president of the Swedish Speleological Federation for many years and has trained more than 200 cavers in SRT (single rope technique) climbing.

Leif is also a cave diver, although lately he has been mostly concentrating on helping the expedition to keep track of its finances. He is responsible for the budget and all matters, related to money. Amanda has been a member of Expedition Bjurälven since 2014. She has been diving for about ten years, and felt she found the right thing after she combined diving with her interest for caves. For her, Expedition Bjurälven is the perfect combination of diving, caving and outdoor activities.

Amanda lives in Gothenburg where she works as an engineer within medical technology. In the expedition team, Amanda works with logistics and is responsible for finances. 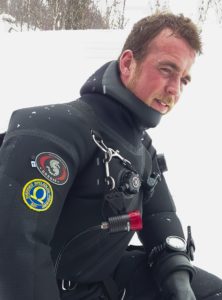 Andreas joined the expedition in 2014. He has been caving for many years, and he loves the magnificent and rare environment the nature has created in caves. His excitement about caves and knowledge in diving got him into cave diving to be able to go deeper into caves.

Andreas lives in Gothenburg and works as a firefighter. With his knowledge and interest in safety and rescue, he works side by side with Stina on the safety during the expedition. In addition to his duty as exploration diver, David is also the expedition’s expert on cave mapping software. Using data collected by divers, he transforms notes into 3D images of the cave. David has been exploring the caves in Bjurälven for some years now, and he cannot get enough of their beauty.

David lives in Bergen in Norway and works as a mechanical engineer on subsea projects. On his spare time, he dives deep wrecks scattered around the city on his rebreather. Ola doesn’t have a diving license. Instead, he joined the expedition in 2015 to help explore and survey the cave at the Bjurälven submergence, where no dive-able sump were known.

He has been caving since 2010 and thinks the best caves are wet, sporty and vertical. Speleothems can be mind-blowingly beautiful, but they come as a bonus. He thinks exploring is the best part of caving. He loves the unpredictability of caves, to never know what’s around the next corner.

Ola works as an engineer in the vehicle industry in Gothenburg, far from the outdoors. To compensate, he took 6 months off during 2017 to travel around the world and enjoy the nature and caves in Australia, New Zealand and Brazil. Marco joined the expedition in 2017 and has been a member SSF since the early 1990s. A true caver by heart, but with many different skills up his sleeve such as climbing, diving and surveying.

Marco works as a researcher in mathematics at SMHI, the Swedish Meteorological and Hydrological Institute.

He lives with his family outside Norrköping. He has a commercial diving license and has been a mine-clearance diver in the navy. 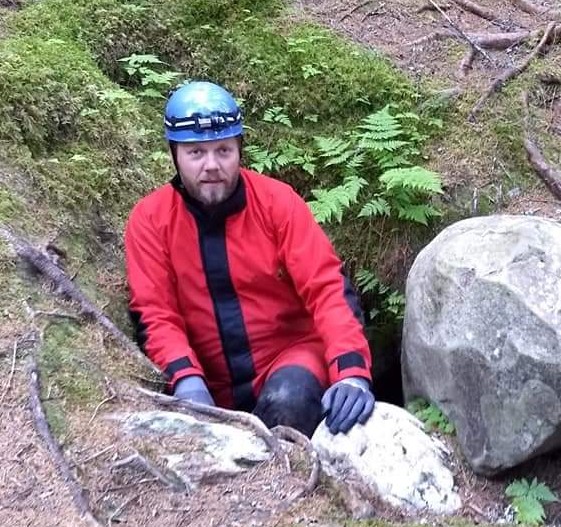 Trond Einar has been diving caves since 2009 and love to explore the narrow marble caves in Norway. He’s an field engineer making sure that we have signals for radio, mobile and TV. A true handyman with broad experience with everything from snowmobiles, compressors and fixing stuff. Mikkel is an active diver who has included himself in local dive clubs and enjoys every moment that is spent under water. He started cave diving in 2015 and has been cave diving in Norway and in Swedish mines to gain experience. He loves to show off all the mysterious and exciting things we can see underwater, so he takes both pictures and movies to fascinate the people that are not divers. He is the project’s video blogger and will keep the internet updated on how the project week progresses. 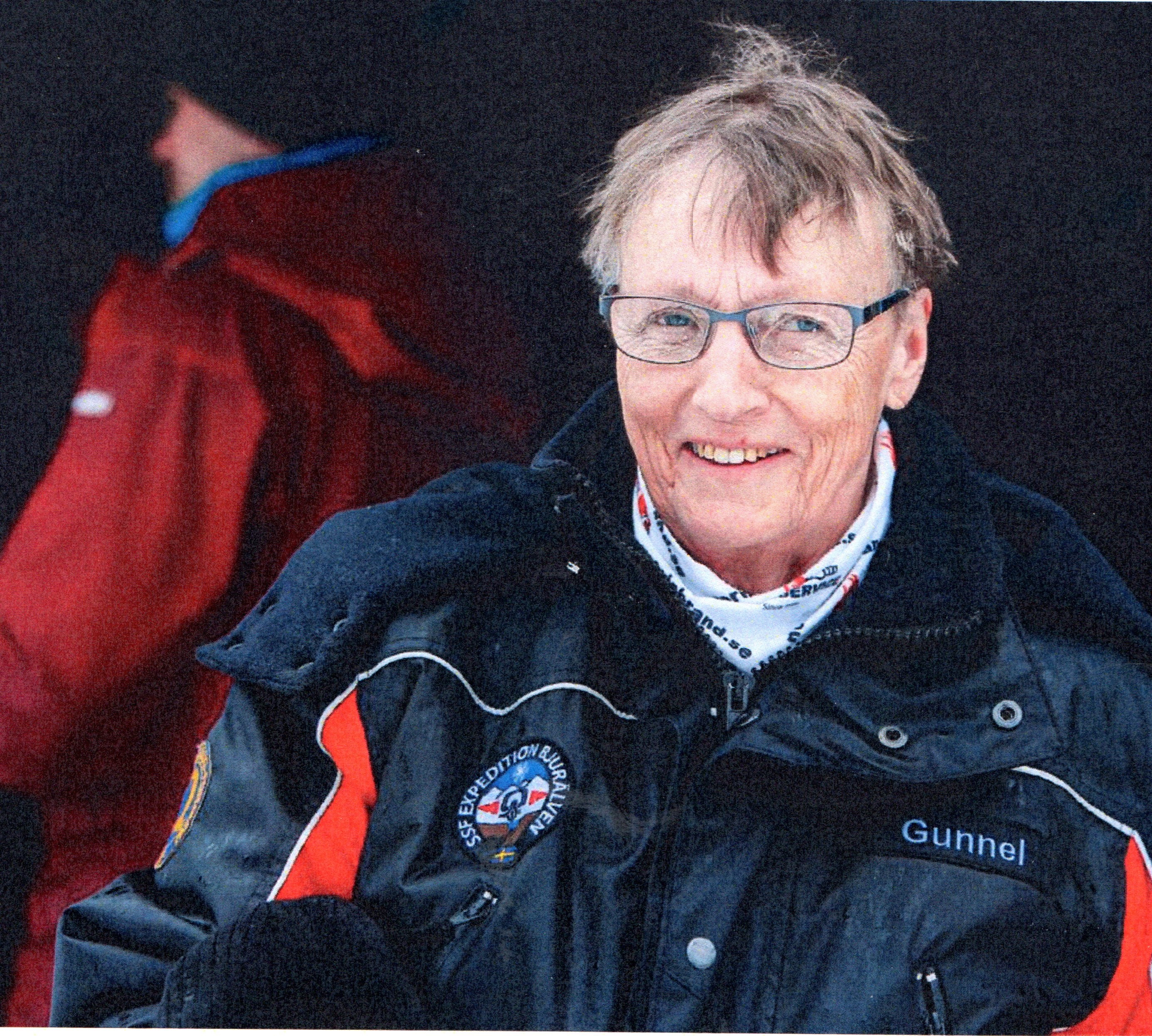 Gunnel and her husband Lewi live in the village of Stora Blåsjön and have been a part of the expedition since the first winter dives in Bjurälven in 2007. They have been taking care of the practical things on location: preparing the accommodation in the old village school, the tracks to the Dolin lake base camp, the camp site itself, snow mobile transports, food and so on.Lewi passed away in 2014 and there is a passage in the Dolinsjö cave named after him. Gunnel is a retired schoolteacher and works as a nature guide in the Bjurälven valley. Anders is born and raised in Stora Blåsjön. He has been working with installation of fibreoptic cables in Norway for the last 11 years. Hunting and fishing are his biggest hobbies and he has been a big asset to the expedition as a skilled snowmobile driver, used to being in the mountains and with a lot of local knowledge, since around 2012. Anders got to try diving in the Dolinsjö lake, where the cave starts.